First Amendment Right to Free Speech in the Employment Context 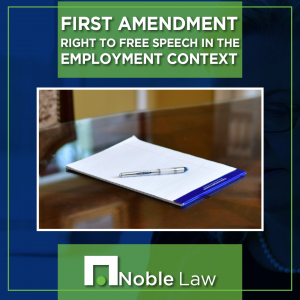 Recently, there has been an abundance of discourse surrounding the topic of free speech under the First Amendment of the United States Constitution. Very few seem to understand, or remember, that the United States Constitution was written with the sole intent to protect private individuals from overreaching actions performed by the Government, whether federal, State, or local. Therefore, the Constitution only applies to Government actions against private individuals. In the employment context, this means a private employer can restrict the speech of its employees without fear of violating an employee’s right to free speech. In fact, a private employer is incapable of violating an employee’s First Amendment rights by the mere fact that a private employer is not a government entity.

Often, employers have a code of conduct that is provided to employees as part of their terms of employment which can restrict employees’ speech not only at the workplace and during work hours, but outside of the workplace as well. For example, if an employee uses hate speech or promotes racist views which are contrary to the employer’s code of conduct or policies, it is within the rights of the employer to terminate the employee particularly in light of most employers’ anti-harassment and/or equal employment opportunity (“EEO”) policies which are mandated by law in most States. Many employers now have such policies that extend to the use of social media, in the sense that employees can be terminated for making public statements that contradict an employer’s mission or hurt/injure a private company. For example, an employer whose mission it is to provide aid to refugees may terminate an employee who makes public statements against providing aid to refugees, as the employee’s speech is undermining the employer’s mission.

This is true, even within the context of government employers who have policies and procedures that prohibit racist and/or discriminatory language and/or acts. An employer who has an anti-harassment and/or EEO policy can restrict the speech of employees at the workplace. In the context of public employment as a police officer or firefighter – positions for which an individual takes an oath to serve and protect the public – the government can and often does have codes of conduct that place limitations that employee’s First Amendment rights. For example, in many jurisdictions, an off-duty police officer would be subject to discipline if he or she actively participated in Neo-Nazi parade that promoted the elimination of all non-Caucasian people via violence. This form of speech would be in direct conflict with the police officer’s or firefighter’s oath to serve and protect the public. However, any such discipline or termination of a public employee would still likely be challenged by the Union or in a court of law, using the First Amendment to dispute said discipline. Often, the courts are the final arbitrators of such issues regarding public employees. In the private employment context, there is no such challenge, as a private employer is not subject to the First Amendment. Private employers can limit an employee’s speech, provided that this prohibition does not violate the employee’s right to speech under other labor laws. For example, an employer cannot prevent an employee from trying to form a Union outside of work hours.

Other forms of limitations on First Amendment rights that are common in the government workplace are dress codes. The First Amendment extends to freedom of expression beyond speech, it also includes attire. It is perfectly within the rights of a government entity to have a dress code which employees must abide by. For example, it is not a violation of an employee’s First Amendment rights to require employees such as court officers, policemen, firefighters and the like to wear uniforms. Similarly, it is not a violation of the First Amendment to prohibit government office workers from wearing tank tops to work or t-shirts with profanity. Said restrictions are part of the bargain struck between the individual and the government employer in order for the individual to obtain public employment and the benefits that go along with such employment.