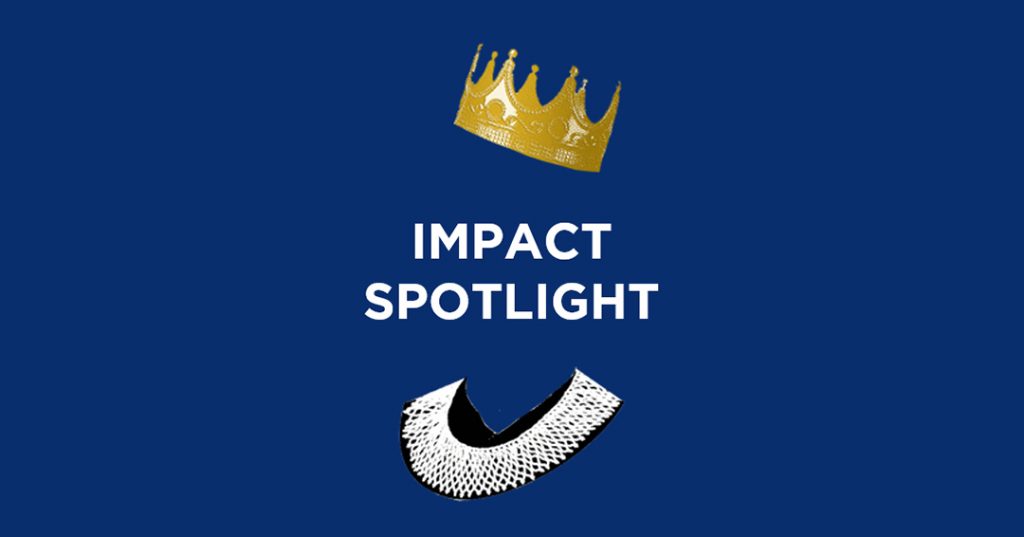 I learned about RBG’s passing while on the phone with a friend who is not a lawyer.  He was shocked when I immediately burst into tears. Why such a profound reaction about someone I had never met, who was elderly, and had a history of serious health conditions? I had an immense feeling of loss for an icon for women, for female attorneys, and for equal rights lawyers. Still, I couldn’t really explain my grief in the moment. I went out for a long walk to digest my feelings.

As a feminist, I have enormous respect for Justice Ginsberg’s lifetime commitment to eradicating barriers to women’s personal and professional success. “I ask no favor for my sex. All I ask of our brethren is that they take their feet off our necks,” Ginsburg had quoted in her oral argument before the Supreme Court in the 1973 case of Frontiero v. Richardson (which contested a U.S. Air Force policy of providing benefits to dependent spouses differently based on sex).  She also had a style that I found particularly appealing, from her personal esthetic to her approach on advocating for equal rights. “Fight for the things that you care about, but do it in a way that will lead others to join you,” she said.  This piece of advice has guided me through much of my career.

As a female attorney, I am in awe of the fact that she went to Harvard Law School with a young baby to care for and an ailing husband.  While I was single and childless, I still struggled to get through the vast amounts of reading and writing that law school demanded. Justice Ginsberg did it with little sleep, constant caretaking demands, and double the amount of work as she helped her husband stay abreast of his studies. This just seems like a supernatural feat to me.  And she not only took on this task with grace, but she excelled at her studies and earned the grudging respect of her almost exclusively male peers.

Finally, as an attorney dedicated to protecting the right of individuals in the workplace, I am profoundly grateful for the jurisprudence that RBG created through her work as a trial attorney and a judge.  Before being appointed to the bench, she co-founded The Women’s Rights Law Reporter, the first law journal devoted to women’s issues; in 1972 she founded the American Civil Liberty Union’s (ACLU’s) Women’s Rights Project while serving as its general counsel; and in 1974 she wrote Text, Cases, and Materials on Sex-Based Discrimination, the first textbook devoted to sex discrimination law.  As a Supreme Court justice, she wrote the majority opinion in United States v. Virginia which not only gave women the right to attend the all-male Virginia Military Institute but also revised the standard for analyzing gender discrimination bringing it closer to the race standard. Then, there were her years as Dissenter in Chief, where she unflaggingly refused to back down to the majority that acted in ways that often undermined the intent of civil rights legislation aimed at reducing, if not eliminating, gender discrimination, particularly in the workplace.

All of this was racing through my mind when I wept. But, to be honest, I think I was most distraught because somewhere in the far reaches of my mind I thought I would meet her someday. Or at least watch her in an oral argument or at a speaking engagement.  It is an enormous regret of mine that I will not have that chance.  My advice to women, lawyers, and passionate followers of fearless leaders is to make the time to be in their presence now.  Use your energy to be in the light of people who you admire and who inspire you.  I wish I had heeded this advice but, in dedication to her, I will make every effort to do so going forward.

Joan Ruth Bader was born in March 1933, a time for women when pregnancy could result in losing their job, their husband’s signature was required to start a bank account, and the ability to open a mortgage was dependent on their use of birth control. Despite these social norms, RBG was raised in a household that encouraged self-sufficiency and independence; her parents were of immigrant and first-generation American status, neither having attended college. At the age of seventeen, in 1950, she enrolled in Cornell University. At that time, the gender disparity among Cornell students was 4:1 male to female, far from the nearly 1:1 ratio we see today (according to 2017 statistics posted on the University’s website). There she met Marty Ginsburg, whose witty humor and unique appreciation of her intellect she found compelling. In four years’ time, she graduated with her bachelor’s degree and the two were married.

RBG entered Harvard Law School alongside Marty in 1957, newlywed and with a 14-month-old daughter, Jane, as one of nine female students in a class of over 500. When Marty was diagnosed with cancer later that year, RBG took it upon herself to support his education, organizing study sessions between him and his classmates and staying up through the night typing borrowed notes from his missed lectures. In spite, or perhaps partially due to, this additional workload, RBG secured a spot on the Harvard Law Review her second year there.

After earning his law degree from Harvard, Marty was offered a job in NYC, prompting their family to move. RBG transferred to Columbia Law School to continue her studies, where she graduated top of her class in 1959. It was her search for a job after graduation that affirmed her understanding that “being a woman was an impediment.” Despite receiving recommendations from several peers noting her academic accolades and incredible work ethic, she was continuously denied employment based on the steadfast principle: there was no room for women in a law firm.