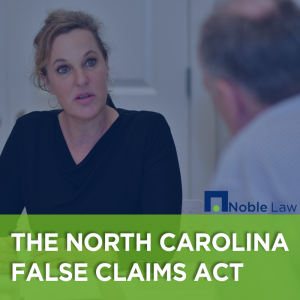 When filing an action under the False Claims Act, the individual filing the lawsuit, known as a plaintiff in most civil cases, is called the “realtor.” The realtor is generally the individual who discovers the fraudulent activity by a person or business entity against the government.

Claims made under the Act are generally known as a qui tam claims, which translates to “in the name of the king.” A qui tam claim is a lawsuit filed for the benefit of the state against a person or business entity for submitting, or causing to be submitted, false or fraudulent claims to the state. Additionally, it can be filed where a person or business entity becomes aware of a claim submitted by mistake but fails to repay the state.

The North Carolina General Statutes Article 51 provides that a person is liable to the state where he or she:

If a person or entity is found to have committed any of the above acts, they will be liable to the state for costs of the action and will be required to pay a penalty up to $11,000. Additionally, the defendant may be required to pay treble damages. When a statute provides for treble damages, it permits the court to award triple the amount of actual damages sustained by the plaintiff. Here, the court would be permitted to award three times the amount of damages sustained by the State.

What if I Report My Employer for Making False Claims for Payment to the State?

A majority of fraud schemes are found by employees while working at the business in question. When reporting your employer for fraudulent or other illicit activities that would otherwise go unknown, you are known as a whistleblower. Whistleblowers can often find themselves victims of harassment, threats, and other forms of retaliation. For this reason, the North Carolina False Claims Act provides protections for those who report illicit activities within a business. The whistleblower employee is protected from:

Where an employer is found to have retaliated against you after whistleblowing, he may be required to pay you two times the amount of back pay, interest, attorneys’ fees and costs, and damages for discrimination, as well as reinstate you as an employee.

In addition to damages resulting from retaliation, you may be entitled to a reward from the State for your whistleblowing. Because most fraud against the state goes unreported, the State will reward the whistleblower a percentage of the recovery from the qui tam lawsuit.

How Do I File a Qui Tam Lawsuit?

To bring a cause of action under the False Claims Act, you will be required to file the lawsuit under seal. This means that the public has no knowledge of the lawsuit, and your name as a whistleblower will be protected until the government pursues the action.

Once the case is filed under seal, the State will have 120 days to investigate the fraud or false claim and decide whether to intervene. If the State chooses not to intervene, the realtor may move on with the action in his individual capacity. After 120 days, the case will become unsealed. However, the State can petition the court for an extension of time if necessary for further investigation.

There are similarities in the Federal and North Carolina False Claims Acts including the protections against retaliation for whistleblowers, the ability to recover treble damages, and provisions under which a person or entity will be found liable. However, there are also differences between the two acts including:

If You Believe You Have a Qui Tam Claim, Call Noble Law Today

If you believe your employer is committing fraud against the government of North Carolina or has made false claims in order to receive payment, call the employment law attorneys at Noble Law. Qui Tam claims are serious, and allegations of fraud should be reported immediately. Our attorneys provide consultations in person at our office in North Carolina as well as remotely. Call the Charlotte office at 704.626.6648 or the Triangle office at 919.251.6008. You can also visit our North Carolina website and to schedule your consultation.