One of the panelists for the “#MeToo: Hot Topics and Emerging Trends in Harassment Legislation” discussion was the dynamic Emily Martin, General Counsel and Vice President for Education for the National Women’s Law Center. I sat down with her for an informal discussion on her incredible

career, what drives her and the NWLC and what still needs to be changed as we move forward.

Part two of my interview with Martin continues below:

Noble: I have railed against Title VII in private and public sectors for a while. For the National Women’s Law Center, if you have to target three or 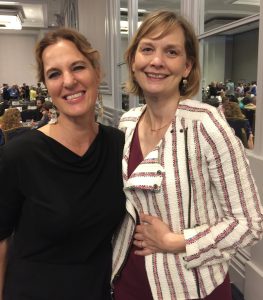 five things that you can change – What are you looking at?

Martin: I would love to hear actually your input because this is the sort of moment where we are answering that question.  It’s some of the things that we have been talking about with lawmakers and with our coalition partners. Our coverage … not everyone is covered by Title VII. There are big chunks of employees who are not covered, which, I think is shocking to the person on the street – that federal law doesn’t have anything to say for a sexually harassed person who works for a company with only ten employees.

Noble: If you are in the state of North Carolina there is no state law. There is literally no way for you to get redress if you are sexually harassed and then fired for complaining about it.

Noble: In North Carolina, if you work for an employer with less than fifteen employees…it is shocking.

Martin: People are shocked when they learn that is the case. By the way if you know of individuals who might want to talk to the press about how they have no remedy, there are journalists who would love to tell that story.

Noble: I will definitely keep that in mind.

Martin: Independent contractors except for a very few states…you can call the police if there is a criminal issue and we can work on your tort law case, but the web of protections that we have created to address sexual harassment doesn’t cover you. We also have been thinking a lot about how to bring more transparency to the issue of harassers so employers aren’t empowered to impose secrecy and keep serial harassers on the job forever, while finding victims of secrecy over and over again. When we do things on the front-end of nondisclosure agreements that appear to reach harassment allegations – they should be explicitly invalid. I think the issues around nondisclosure and settlement are more complicated but I don’t think the status quo is the right answer. So, we have been talking to a lot of practitioners and lawmakers about ways to shift that balance, so, the confidentiality can’t be part of the price of any sort of remedy for victims of harassment. There are creative ideas that people in the state and federal level are working through about ways in which employers have to disclose settlements. For example, Senator Harris in California and Senator Murkowski introduced an act, a month ago or so called “EMPOWER Act” which among other things would require publicly traded companies to disclose to shareholders number of harassment settlements and judgements whether or not they were against the same person in the company. To just bring some sunlight even into these private settlements.

There are other interesting models being kicked around … a state enforcement agency that would have to sign off on a settlement even prior to litigation. Is there a third party who could set up a red flag if the same employer is settling the same thing over and over again? Is there some ability to say, “there seems to be a problem here”? We have also been thinking about how to increase accountability that includes ideally getting rid of damage caps on Title VII. I don’t think there is any principled argument for them. It is solely a matter of a compromise that was worked out a long time ago. Those numbers have not budged and that leads to a lot of employers thinking “well what is the risk really?”

Noble: For me as a practitioner, my concerns are onerous administrative burden of Title VII so having to go through underfunded and overworked government agency makes no sense to me when I am trying to sue someone for stealing my patent. I don’t have to do that – I can just go directly to federal court and have that access to justice. I think EEOC has a place. I can certainly see it do the work for pro se individuals or for larger collective actions, but for most individuals who have a plaintiff’s attorney…

Martin: This is a place you mark time until you get your Right to Sue Letter.

Noble: Yes…One, that delay only benefits the defendant employer. It does not help our clients at all. Two, the damage caps make no sense. Three, federal judges’ ability to dismiss a case on a standard of severe or pervasive should be a jury issue – that kills a high percentage of those good cases. Even after they get through the lengthy process of finding the lawyer that practices federal law, and getting through the EEOC process, and filing your complaint under federal law (along with the larger fees associated with litigation), going through all the litigation, you may end up getting to a judge who hasn’t been in a private employment law case for many years, having to decide what kind of conduct, usually against a woman, is severe enough to affect their workplace.

Martin: We have seen that sometimes even judges don’t get trained in complying with any sort of anti-harassment rules. Not only is their own frame of reference often decades out-of-date and skewed by the fact they were possibly a partner at a large law firm in a powerful position. They don’t even get what you would learn from periodically having to sit down and think about how this would look like in your workplace and what are the standards that are appropriate there. I agree that another important piece of the puzzle is trying to reset the ways in which the “severe and pervasive” standard has been applied in so many courts to be a hurdle…it can be incredibly difficult because of the way some courts parse each individual situation and say, “well that wasn’t much and this didn’t happen till a month later, so this is a whole different thing.” Frankly, I am still thinking about how the legislative language is to fix that problem. I think the key issue is that we need to make harassment laws actually remedy the harms.  The rest of the world who hasn’t had to be a plaintiff in these cases, assumes that it does.

Noble: Right, right… and the public awareness …I can’t tell you how many times I’ve had a client come in and having to explain to them “look, we can try to do this, but you are probably not going to meet the standard.” They are shocked and they say “Wait, this horrible thing happened to me and I’m having trauma and you are telling me the judge is going to decide that it does not?”

Martin: And it is so divorced from the public debate, which is – “well we’ve gone so overboard that a hug is unlawful in some way.”  In fact, it is really, really hard to get some sort of legal remedy for harassment – it’s very divorced from where people think the current conversation is.

Noble:  There is a media problem too, right because they are attracted to these big powerful men cases and then they leave the perception that all the victim has to do is raise our hand and say, “ten years ago this bad thing happened to me and then money rolls in and the corporation fires him and everybody gets training” and that just doesn’t happen in the private sector. The exact opposite happens – these days she gets fired. I keep saying it over and over again.

Martin: One of the other things the TIME’S UP Legal Defense Fund does… is communication support. To help individuals tell their stories publicly and we try to do that sort of public education through individual stories of what harassment looks like, what are the dynamics, what does it mean for the individual who experiences it, so that people have better understanding of what this looks like and what are the real obstacles.

Noble: That’s great.  That’s really great.  So, my last question… you are being honored tonight for your work at the gala… what drives you professionally?

Martin: I am incredibly lucky to get to do the work that I do. What drives me is righteous indignation and anger.  We need to fight for the people who have the fewest resources to fight for themselves. What else drives me is I think that I am more hopeful on some days than others. Overall, I think there is still, even given the really frightening context in which we find ourselves, there is tremendous reason for hope as we have seen through the women’s marches and the outpouring support for TIME’S UP Legal Defense Fund. We are seeing all the women running for office this year. There is opportunity to use that energy to make lasting progress. That also keeps me going.

Noble: Keeps me going, too. Thank you so much for sharing part of your evening with me and for sharing your thoughts on these important legal issues affecting woman in the workplace.

This entry was posted in Noble News. Bookmark the permalink.